All vacation days are diet cheat days and, boy, we do have the perfect tour for you! 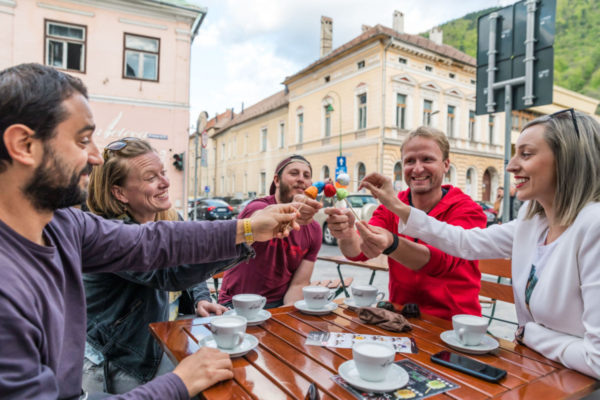 Want to find the best desserts ever? You’re in luck! We have just the right amount of sweetness and the best off the beaten path dessert tour for your sweet-tooth’ness! As we truly believe food says a lot about a town’s history and influences, we have gathered the most fascinating local stories and added a pinch of cultural and culinary history while showcasing some of the finest sweets, treats, and desserts in Brasov. From the golden honey of Roman times to the special cakes made for French Generals during WW1, we’ll experience a trip on memory lane while discovering the quaint cobblestone streets of our oh-so-charming Old Town.

Your final price will be: 44 euro

MINIMUM AGE: Open to children of all ages.

MEETING PLACE: In front of the City Hall, next to the statue of the she-wolf.

make sure you cover your head as the sun gets pretty intense in the summer in Romania. Oh, and wear sunscreen if you feel like.

The tour starts in front of the Municipality, next to the Roman she-wolf statue. The Dacian and Roman age is one of the most important ones in Romanian history and many historians say that honey was one of the biggest Dacian exports of the time to Rome. We’ll start you off with a traditional Romanian sweet snack – the biscuit salami. Just enough sugar to get you going on our nice walk along the old city walls.

After a bit of a hike to check out the ancient defense towers outside the city we’ll slowly come back within the old walls for our first stop at a very traditional and respected confectionery shop. Walk in and you’re instantly transported to the 1960s. The décor, the tables, and chairs, the dim lit atmosphere, everything will feel like you just stepped out of a time machine. Enjoy a Joffre Cake – specially made by famous Romanian pastry Chef at Casa Capsa in honor of General Joffre’s visit to Romania after WW1.

We will then make our way through the narrow cobbled stones of Old Town, actually passing through the narrowest street in Europe – Rope Street. Passing through the ancient city gates of Poarta Schei and Poarta Ecaterina and we will find out which were the rules of entering the city while under Saxon rule. Walk up under the Tampa Mountain for a spectacular panorama of the entire city, listen to the birds and the bees on a short break while you also get to snack on your biscuit salami.

We come back down into the city for our next stop. This would be the modern side of Brasov’s confectionery tradition with artisan hot chocolates and ice-creams in summer. All proudly made in Brasov by a young pastry chef back from studying in Michelin star kitchens.

Back on our walking tour with a pass through Brasov’s main square in Piata Sfatului and a short stop at the small marzipan museum. Their head chef is an artist that builds amazing figures, landscapes and objects entirely out of marzipan. A hidden gem all locals are very proud of.

Before our last stop, we really need to try the most local Brasov sweet: Brasovian cassata (a type of parfait with 3 flavors all-in-one)

We emerge out into the bustling pedestrian streets of Old Town for some more fun historical facts about Romanians’ relationship with desserts and sweets before entering our final stop, a tasting extravaganza: Romania’s first cake flight (similar to a beer flight but with cake instead) where you will get to sample 3 types of exquisite gourmet cakes and top everything off with a glass of prosecco.

Whether or not this is your first time in Brasov, we are pretty sure this will be the coolest way of discovering the city.

Make your own tour

We don’t call ourselves Interesting Times Bureau for nothing:

Write us in advance, tell us what your interests, likes and dislikes are and we’ll try to come up with a tour especially designed for you.

We’ll also make sure to include things a bit out of your comfort zone just to keep things, you know…interesting.

so go ahead: take the red pill

Further details will be communicated in due time.