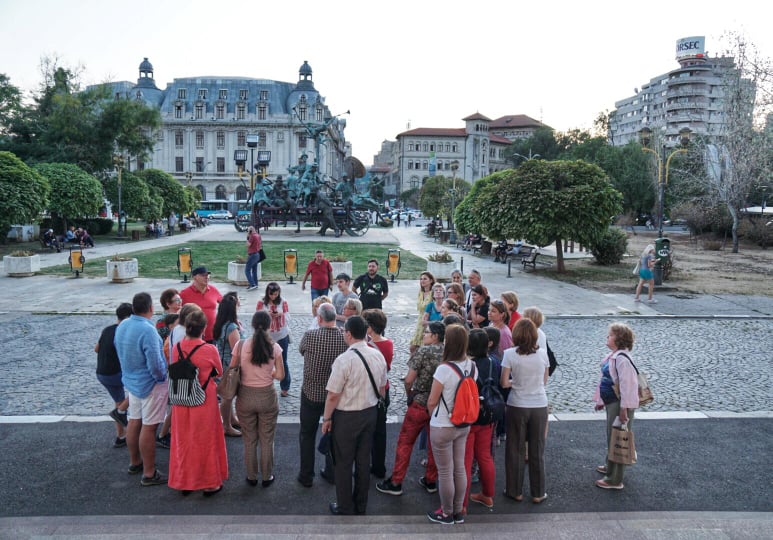 The lovely Andreea from @iarhoinar  has joined us on  the Bucharest Hidden Gems tour last Friday. Find out all about her experiences within this tour and feel free to join us on the very last weekend of FREE guided tours hosted within the Festival is Everywhere range of events dedicated to the George Enescu Festival  2019.

Bucharest. My home city for more than 30 years. I kind of began to hate it: its huge, grey buildings, the traffic jam and its noisy streets. But maybe I don’t know it as I should. I wonder what is there, behind all these communist blocks? Is there a chance, maybe a little one, for me to discover a different city? Could I fall in love with my city again and avoid a “divorce”? Well, such a long relationship deserves another chance. Especially when the city is going to be revealed through interesting stories on a great walk in the weekend’s evenings. This was what Interesting Times Bureau and Noua ne pasa Association promised when organizing the free tours during George Enescu Festival.

So, on Friday the 6th of September, I took my camera, I ran away from work and at 5.20 I was right in front of the Enescu’s statue because I like punctuality. There was nobody around. “Well, Romanian people… They are always late”, I said to myself. In another five more minutes, I began to doubt about my being in the right place. I searched the event again on Facebook and… surprise! I was supposed to be in front of Enescu’s statue. But not in Piaţa Operei. So, I started running and praying at the same time. I reached the statue on Magheru Boulevard just in time. Well, I lost 5 minutes of stories, but I didn’t lose the tour.

Bucharest Hidden Gems. These were my targets for Friday evening, in a 2 hours walking tour. I had some expectations, of course. I, somehow, expected to see old and elegant houses, maybe even some elegant gardens. But I never thought that I should get to see some wonderful street art. So, after finding out a little bit about Take Ionescu’s house and life, after finding out interesting stories about some very old buildings on the Gral. Eremia Grigorescu Str., I saw Anita, our guide, stopping and starting her stories about the girl painted on a big wall of Point bar & theater building by Sweet Damage Crew. Well, this is quite a gem! And quite hidden!

Moving further, we became witnesses of stories related to Cantacuzino family. Well, this was a good moment to talk a little bit about George Enescu’s love life and especially about his relationship with Maruca Cantacuzino, former wife of Prince Mihail Cantacuzino. As we are right in front of Grădina Icoanei Park, Anita takes this chance and tells us a little bit about the generosity of the aristocracy in those times and how everybody was dedicated to look for the country’s well being and not for their own interests. We can’t say the same thing about nowadays priorities…

Walking on Dumbrava Roșie Str. was my favorite part of the tour. Old and elegant mansions in quite good shape, Romanian architecture, stories about life and problems of our ancestors, all these made me go back in time for a couple of minutes. I could almost hear Enescu’s violin playing for the Royal Family. I gave up all this dream to join the rest of the group who was already in front of Vintilă Brătianu’s vila, on the Aurel Vlaicu Str. Oh, God, I would do anything for being taken back in time, in that precise period! I’m looking at this beautiful mansion and again my imagination is going wild. Now I can almost see ladies all dressed up, prepared for the ball.

I am awakened again. This time by the bells of the Icoanei Church. Beyond the history of this church, which crushed in 1838 because of an earthquake, what I like most is the silence that surrounds it. While Anita is telling us about Enescu’s religious beliefs, I see how each tourist is enjoying the time spent in the shadows of the old trees and is literally eager to find out more and more, to get to know the facts of the history even deeper.

We couldn’t get out of this neighborhood without a quick stop at Şcoala Centrală, a school dedicated, in the beginning only to the girls, who were daughters of the Bucharest’s elite. The architecture reminds us of the way monasteries looked like back in the 18th century. It is interesting how, along the years, the building hosted schools, a hospital and even a post office. Nowadays, it is one of the most appreciated high schools in Bucharest. And, of course, it is also for boys.

We have a few more stops before the end of the tour: the house of Constantin Vasiliu Bolnavu that nowadays is headquarters for a bank, another architectural jewel hidden on Ion Luca Caragiale Str. under a lot of ivy, Marmorosch Blank House known also as H. Spayer Palace, Edgar Mavrocordat Vila known also as the former headquarters of the US Embassy in Romania. I won’t reveal stories or information about them. I don’t want to spoil the surprise. Not even for me, as I might join the groups again. I have one last chance next Friday.

PS: yes, my relationship with Bucharest, my home city, began to breathe again! 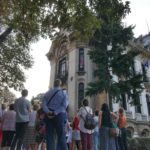